Ever since he asked us “What’s My Name?” in his 1993 debut single as a lead artist, Snoop Dogg has constantly reminded us of his presence in the entertainment world. He is now extending that influence through the branded apparel domain, teaming up with Dunkin’ on a line that furthers his ties to the Beyond Meat initiative that the company supports.

For the Beyond Collection that went live yesterday through the Dunkin’ merch website, seven items are supporting Snoop’s business partnership with the coffee and donut bigwig. The goods provide a range of prices that will help end-users prove the depth of their devotion to the D-O-Double G.

The rapper has caught the eyes of vegans for a little more than a year, and Dunkin’ joined with him to create a sandwich that centers on a Beyond Breakfast sausage patty and marks his commitment to promoting a healthier diet. Delish raved about that item as a perfect combination of the faux meat, egg and cheese and a glazed donut bun, and touched on the apparel as a way to support Snoop’s employee of the month distinction from Dunkin’ in November. 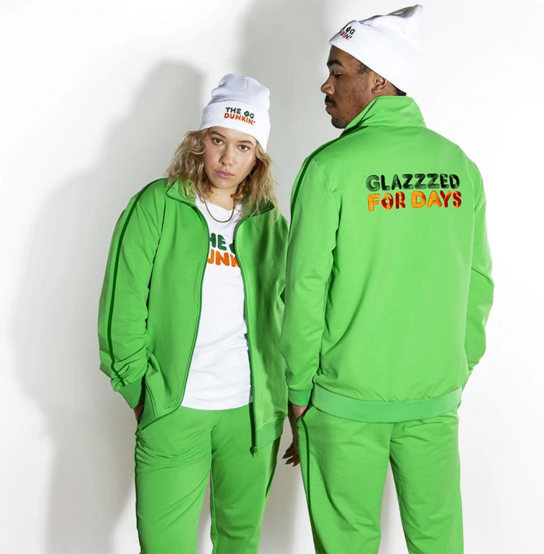 The Glazzzed For Days Tracksuit Jacket & Pants are selling for $85 on the Dunkin’ merch site. | Credit: Dunkin’

While that title gave him some additional clout in helping his “boss” move food, the apparel collection options will be more about consumers’ desires to look stylish and come close to mimicking the attention-grabbing vibes that Snoop puts out whenever he’s in public. Priced from $20 to $85, two hats, a tracksuit, a bomber jacket, a T-shirt, a sweatshirt and jogging pants all give a nod to the green, orange and white hues that Dunkin’ calls on for the Beyond D-O-Double G sandwich. We’d have to say that the tracksuit combo is our favorite, though we’re pretty sure a breakfast sandwich on a glazed donut bun would cancel out whatever exercise we’d be doing in it.

That confession provides some insight into the booming trend that sees food companies issuing branded merch lines. On the surface, one might think that the Dunkin’ and Snoop Dogg relationship is a tad goofy, but no matter what his birth certificate says, the 48-year-old always figures to see himself as young, wild and free, and that means that whenever he sees a chance to build his brand, he’s going to jump at the chance. In doing so, he’s furthering a dietary practice that he has fallen hard for while not damaging his industry credibility, since, as any fan of Snoop Dog knows, the man is immune to critiques and charts a very individual course.

That journey sees him calling on the Beyond Collection to usher in a new stage for his branding and finds Dunkin’ doing the same in the restaurant world’s push to gain the public’s trust, admiration and, well, money.