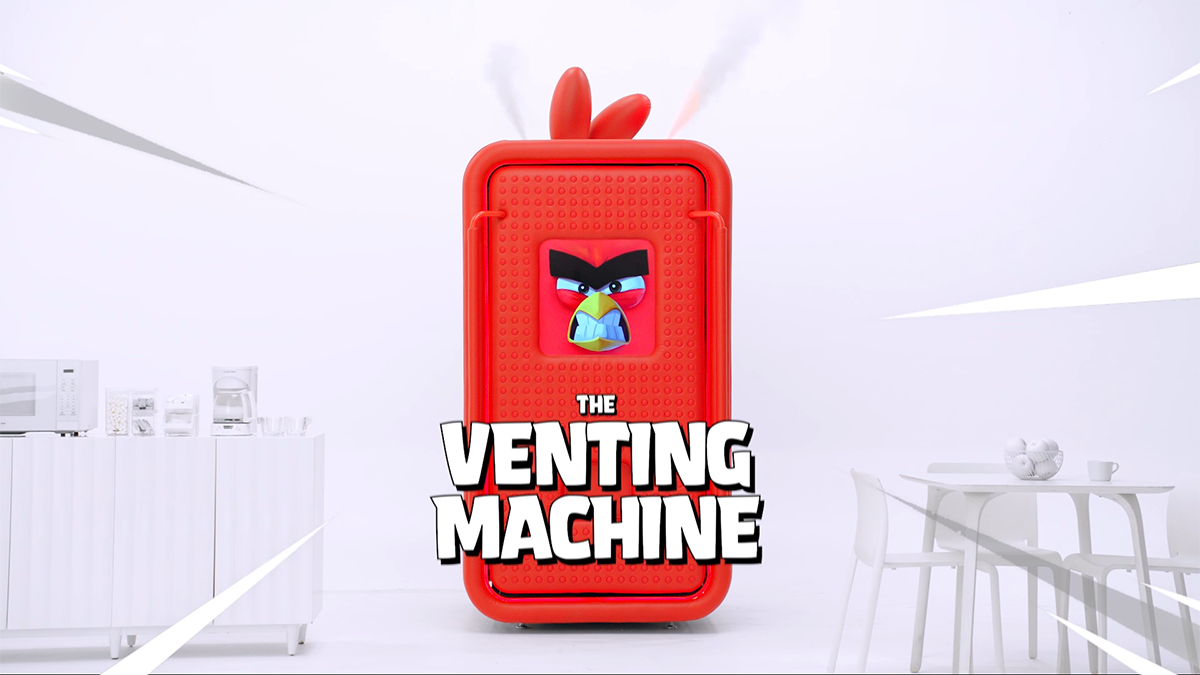 Picture this: You feed a crisp dollar bill into the vending machine, only for your bag of Flamin’ Hot Cheetos to get caught juuuust before the little swirly thing completes its spin, sending you into a flamin’ hot rage of punches and sweet karate kicks that reduces the machine to a smoldering metal pulp before the police arrive to escort you from the scene. We’ve all been there. And Rovio, maker of the Angry Birds franchise, is looking to turn that shared experience of the human condition into promotional gold.

It plans to do so through the latest vending-machine-related experiential marketing campaign, one of many we’ve seen recently. Only in this one, launched in partnership with creative agency Droga5 to celebrate the 10th anniversary of Angry Birds, Rovio wants people to absolutely obliterate the machine—or take their best shot at it, anyway. And thus, the “Venting Machine” was born.

We’re celebrating 10 years of Angry Birds with THE VENTING MACHINE, the first vending machine that takes your anger as payment. Punch it, shake it or shout at it to get a sweet prize! So #BringTheAnger to Times Square and vent on Nov. 21st. #AngryBirds10 pic.twitter.com/EYatBQyKOM

Here’s how it works: When it’s your turn, follow the on-screen prompts, then do your best Rocky Balboa on the padded machine until your time is up. Embedded cameras record your session, replaying the highlights and, if you’re lucky, playing them on a billboard in Times Square, where the machine will be located. When it’s all done, it spits out an Angry Birds branded stress ball in a little box designed to look like one of the crates from the game. The police don’t even have to get involved!

It’s a simple concept, but it’s brilliant in its execution. Thematically, the Venting Machine ties in perfectly with the Angry Birds universe. It’s creative enough to grab the attention of advertising and marketing media outlets (hey, that’s us) for some free publicity. And it uses promotional products in a fun and memorable way. The choice of branded merch—stress balls—is a neat little wink. The whole thing is extremely Instagrammable, which, frankly, should be just about every marketer’s chief goal these days.

Here’s a video of the machine in action, via Engadget:

As we said, this is but one of several experiential marketing campaigns that have put vending machines to good use. Last October, Adidas used a pair of machines to dispense World Series merch in Los Angeles and Boston, drawing big crowds. A few days later, just ahead of Halloween, Reese’s unveiled a machine that let people exchange gross candy for Reese’s Cups. This year, the New York Mets employed a trio of “trivia” vending machines to distribute branded merchandise for the team’s “Seinfeld” 30th anniversary celebrations.

The Venting Machine was only available for one day, Thursday Nov. 21, in that Times Square location. We’ll let you know how it went!

The team at @AngryBirds / @Rovio have set up a "Venting Machine" in @TimesSquareNYC for the 10th Anniversary of Angry Birds — pic.twitter.com/1QKdU8JzKH