Are T-shirts and Tote Bags Enough to Save Elon Musk? The Mysterious 'Team Elon' Web Store Thinks So

Elon Musk straddles that line between super rich altruist and supervillain. It really just depends on the day. One day he’s offering to use his seemingly endless wealth to fix traffic and send us to Mars, other days he’s handing out flamethrowers to the public.

What’s clear is that Elon Musk has positioned himself as a master of branding, if absolutely nothing else. And his loyal fans (or henchmen, depending on your opinion of him) didn’t take kindly to the SEC filing a lawsuit against the Tesla CEO over his erratic behavior and tweets—something some have found endearing and humanizing, and others troubling.

The former group started Team Elon, a Shopify store selling branded merchandise ostensibly aimed at supporting Musk, a billionaire, in his fight against the SEC. It’s kind of like the “Save Ferris” memorabilia from “Ferris Bueller’s Day Off,” only if instead of a lovable ’80s goofball Ferris was an ultra-rich entrepreneur smoking weed on podcasts and going on Twitter rants.

And get a load of the Team Elon mission statement, which appears on the site under the triumphant header “Elon Settled!”

Our mission was to create a way for the people of earth to help Elon Musk with the preposterous SEC filing against him. This man has dedicated his life to the betterment of future generations, and he should be free to continue focusing on his inspiring and meaningful work.

By purchasing these products, we vow to spread the word, to rise up and shout for what is right! As citizens of planet earth, we must show our support for innovation, for attempting to create a positive future, and for our fearless change agent of the world, Elon Musk.

Elon, on behalf of all of humanity, we thank you for what you have done, and what you will continue to do in the face of outstanding odds. You inspire us all and will, in turn, inspire future generations.

This is all very weird and kind of cult-like, made stranger by the fact that no one has been able to figure out who’s behind the store. At least the merchandise looks pretty good, if minimalist: 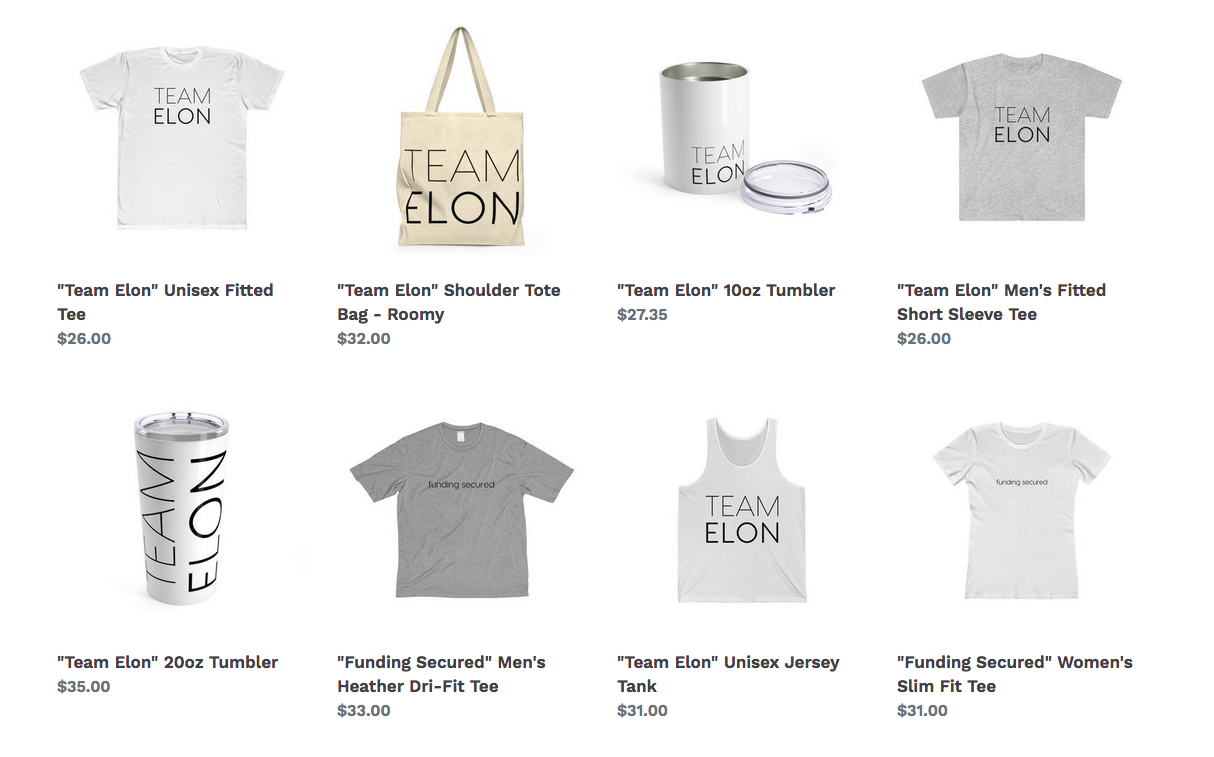 Musk himself fanned the flames (that’s a flamethrower joke) by taunting the SEC on Twitter, i.e. doing the very thing they sued him for in the first place.

Just want to that the Shortseller Enrichment Commission is doing incredible work. And the name change is so on point!

Musk settled the lawsuit by declaring that he would step down as Tesla chairman and pay a $20 million fine. Tesla also agreed to pay a separate $20 million to settle claims that it “failed to police Musk’s tweets,” according to CNN.

Musk is still allowed to stay on as CEO, but some, like David Einhorn of Greenlight Capital, think that this recent outburst is his way of trying to get himself fired.

Einhorn, who correctly predicted the 2008 financial crisis, told CNBC that he likened Tesla to Lehman Bros. While Tesla said it expects to be profitable from the third quarter onward, Einhorn said that he expects Tesla’s fourth quarter revenue and earnings to fall short. After Musk’s tweet mocking the SEC, shares dropped 5 percent.

T-shirts and bags might not be enough to truly save Elon.