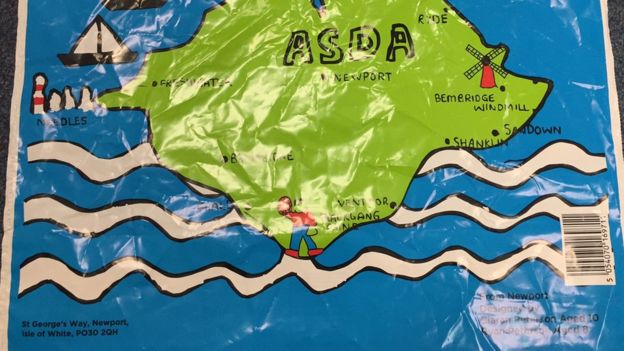 My initial awareness of the Isle of Wight came 22 years ago, when, as a 16-year-old with a burgeoning interest in The Beatles, I heard Paul McCartney suggest in “When I’m Sixty-Four” that he and his romantic partner should consider renting a cottage there each summer. I thought that if the location were good enough for the Liverpool lads to mention, it must be an alluring destination, so I researched it a bit and became a fan of its amenities, notably its eponymous music festival that consistently draws rock royalty every June. Well-versed in the largest English island’s clout, retailer Asda Stores Ltd. opened its first store there last week, yet the 10,000 “bags for life” sale items dubbed the site the “Isle of White.” Asda Stores Ltd. will need to make amends for the 10,000 bags that made a popular English destination the Isle of “White” instead of Wight. | Credit: Isle of Wight Radio

The West Yorkshire-headquartered entity situated the supermarket in Newport, the island’s centrally located county town and chief shopping expanse. Proving the importance of proofreading, the erroneous containers marred a very impressive design collaboration by two local children, leading a spokeswoman to declare the gaffe was “a genuine printing error.”

Some products make obvious their likely longevity, with disposable cameras and permanent markers coming to mind, so Asda’s designation of the carriers as “bags for life” teems with irony since they will not stand any test of time. Asda has noted its hires are “hanging our heads” and are “in the process of reproducing the exclusive design to get back on sale as quickly as possible.” A travel website for the Isle of Wight explains how England’s second-most populous island acquired its name, noting that Iron Age Celts christened it with its present spelling and that the lettering has never been W-h-i-t-e.

The mistake yet again confirms that nobody’s perfect, but it also strengthens the contention that people love to pounce on typos, as #RetailFail became a rhyming trend on Twitter. Here’s hoping the initial editing process will pale in comparison with the second attempt to encourage consumers to purchase a dependable, not to mention accurate, bag.