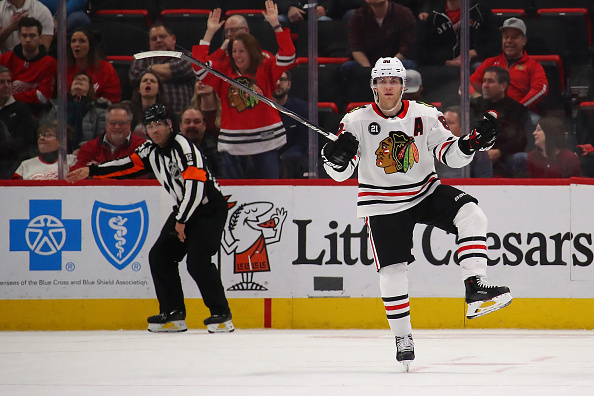 Though we still hold a solid grudge against the Chicago Blackhawks for beating our local Flyers in the 2010 Stanley Cup Final, we can commend the franchise’s promotional products clout, which it displayed last week during its National Margarita Day celebration at the United Center with Jimmy Buffett-themed promos items.

Join us before the EARLY 6:30 p.m. puck drop on Friday in the @UnitedCenter Atrium: We're celebrating #NationalMargaritaDay Jimmy Buffett style!

Sometimes, the scheduling world works out perfectly, and the Blackhawks’ chance to have a home game on the day of the observance certainly counts as an example of the hockey gods’ generosity. That is because the organization has quite a history with Buffett, who has come to be synonymous with margaritas. Blackhawks star Patrick Kane, for example, has commemorated the team’s three Stanley Cup titles through concert interactions with the 72-year-old chart-topper, thus making the musician sort of an adopted son (although “grandfather” might be more apt) of the team. Fans in attendance had the chance to score some great giveaways, which varied depending on when they arrived to the arena and the age of the patrons.

Celebrate #NationalMargaritaDay with us this Friday!

The @UnitedCenter Atrium is turning into a beach party at 4 p.m. before an EARLY puck drop at 6:30 p.m.

The initial 1,500 fans who ventured there to see the Blackhawks face the Colorado Avalanche received a Blackhawks Margaritaville shirt, with the garment deriving its name from Buffett’s most successful tune and restaurant chain. Supporters who are of drinking age scored a branded Margaritaville cup if they chose to purchase something from the bar in the United Center’s atrium. There were also prizes like flip-flops for participants in a Margaritaville costume contest. To us, though, the chief prize of the theme night, which also included a performance by a Buffett cover band, had to be the Margaritaville-themed bicycle. Blackhawks fans could win the bicycle by finding a special parrot beach ball in the arena.

When you remember Margaritaville Night is TOMORROW

The colorful giveaway is in keeping with the vibrant, carefree persona that Buffett offers in his music, so not only can we envy the Blackhawks for their titles but also their management’s creativity for coming up with this giveaway. To the one who secured the wheeled wonder, know that you are always welcome in Philadelphia to show off your reward for having good dexterity. Just don’t remind us of the 2010 Stanley Cup Finals, OK?