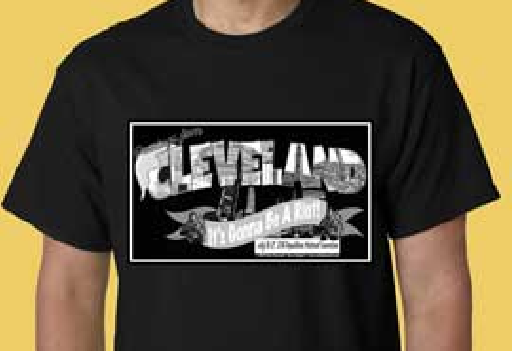 The 2016 Republican National Convention will take place in downtown Cleveland July 18 to July 21, and it’s already inciting an uproar, according to The Lakewood Observer.

Recently, T-shirts promoting the RNC were pictured featuring the phrase, “Greetings from Cleveland … It’s Gonna Be A Riot!” Between Donald Trump predicting riots in the event he loses, and Cleveland purchasing riot-control gear in anticipation of the RNC, the event very well could be a riot. The “riot” T-shirt. (Image via ColinDussault.com)

So, shouldn’t the T-shirts attempt to dissipate the potential violence? Colin Dussault, the creator of the T-shirts, doesn’t seem to think so. With sales of the T-shirts already surpassing several hundred, Dussault has no plans of ceasing sales.

“People from Cleveland have a certain indiscernible, self-effacing kind of humor and pride that only we locals can understand,” said Dussault, via The Lakewood Observer. “Like the river burning and the Nickel Beer Night Riots, this too shall go down as a historic moment in this town. Thanks to my muse, I have the fortunate distinction of cashing in on it before and during the event as opposed to after the fact. So, hate the system. Hate the party that is changing the rules. Hate the rioters. Hate the fact that the leader is not trying to quell the riots, but don’t hate me for seeing an opportunity and seizing it.”

However, Cleveland residents aren’t thrilled with the implications of the T-shirt, according to Fox 8 Cleveland.

“There’s gonna be a lot of people that are gonna be in town, and people are gonna come to express their opinions either way, and I think that we’re already giving them T-shirts and giving them an idea of what they should do?” Cleveland resident Kristin Kozel told the station. “It’s a bad idea.”

With tensions running high and this 2016 election being one of the most polarizing elections American voters have witnessed, is this T-shirt the best idea?

While a T-shirt might not seem that influential, it can be hard to see the controversy. However, promotional T-shirts are proven to be very influential in determining consumer sentiment, and politicians are well aware of the power of the promo.