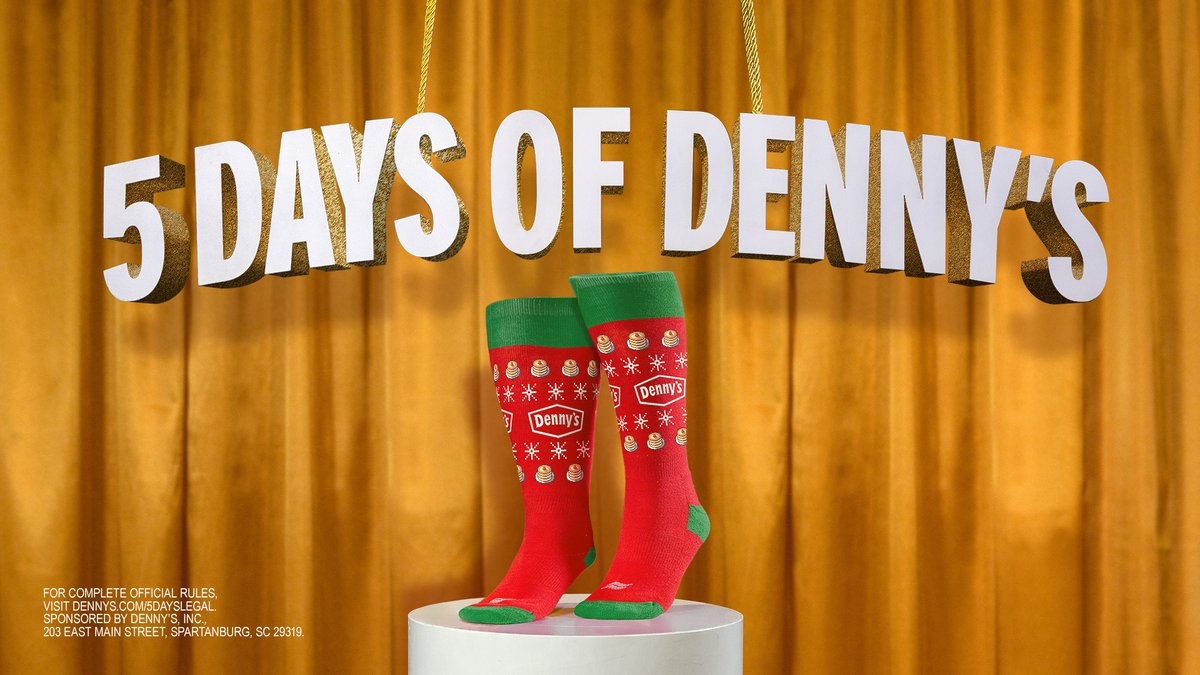 If you had the fortune of being able to stuff yourself on Thanksgiving, you might not want to consider looking at a large plate of food again until next November. Along with showing goodwill and giving gifts, this is the season, however, for taking in considerable quantities of calories, and Denny’s wants not only to be a destination for feasts but also an entity to sate end-users’ branded merch cravings. Through Thursday, the restaurant chain is pairing grub and giveaways thanks to its Five Days of Denny’s promotion that is sure to up its social media identity and grant winners a hearty helping of attention this winter.

On the 1st day of December my Denny’s gave to me: One Card of Gifting. Buuutttt I had to comment with a pic of my empty wallet first. For official rules visit https://t.co/xzor3lEqtR pic.twitter.com/KjsiPvLZBI

On the 2nd Day of December my Denny’s gave to me: A pair of festive socks for my feet. But I had to comment below with a pic of my boring old socks if I wanted a chance at owning em. For official rules visit https://t.co/xzor3lEqtR pic.twitter.com/AmsB5CcAWZ

We are still more than three weeks away from Christmas Day, which commences the 12 days of Christmas made famous by a song of the same name. However, it’s never too early to make a pun on that tune, and Denny’s is doing so through its Five Days concept that began yesterday. With 1.3 million Facebook “likes” and more than 511,000 Twitter followers, the eatery already possesses a strong social media presence, and it is those individuals, along with anyone who wants a shot at branded merch and reduced-price pancakes, who need to act now to have a way to flaunt their fandom.

On the initial day of the promotion, Denny’s announced 20 winners of $25 gift cards, and while fans might be kicking themselves over just having learned about the promotion now, they will be nearly inconsolable if they don’t go after the apparel that remains.

Anyone with an affinity for Denny’s cannot go wrong on any day of the contest, but today and Wednesday, from our perspective, seem the best ones to inspire people to head over to Facebook and Twitter. That is because a total of 40 fortunate consumers will receive pancake-adorned socks and bacon-decorated scarves sure to give Old Man Winter the cold shoulder. To qualify for the giveaways, fans need to comment on the social media prompts and include a picture that adheres to Denny’s directives.

For today, pancake sock seekers must include an image of their “boring old socks” to be in the running, making us wonder what the scarf hopefuls will need to do. On the non-merch days, Denny’s will be giving out a year’s supply of its famous Grand Slam meals to one very fortunate contest entrant, and will provide $0.50 pancakes to everyone, regardless of participation in the “Golden Cakes” giveaway. Those buttermilk goodies might be the ultimate prize to many folks, but calories go to quick use and need successors. The branded merch, however, could become a lasting part of the winners’ wardrobes.