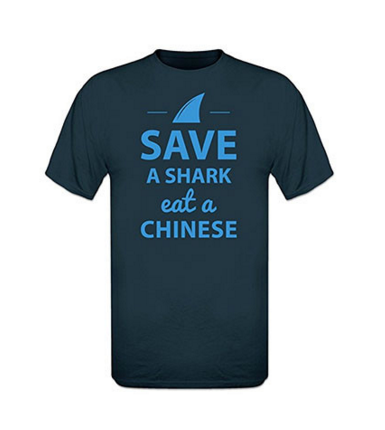 A German online retailer sold T-shirts the Chinese Embassy in Berlin found so offense that it demanded their removal, according to USA Today.

Online shop Spreadshirt.de sold T-shirts with controversial slogans, like “Save a dog, eat a Chinese,” which apparently did not go over so well with the Chinese Embassy.

“We demand from the German supervisory authorities to exercise their duties with regard to the business activities of the company and the website so that the friendly feelings between our two people will not be damaged,” the embassy’s statement said, according to RT.

Spreadshirt did not design the shirts. Instead, it lets users design and sell their own T-shirt designs. However, many were disappointed that Spreadshirt allowed the tees to be sold in the first place.

Supposedly, it was a simple grammatical error, and was meant to imply that Chinese food should be consumed, not Chinese people.

Campaign To Remove SAVE A DOG/SHARK EAT A CHINESE From Online Stores Launched https://t.co/gf1nKwjCwe pic.twitter.com/3pbIsUjGN7

The T-shirts in question have since been removed and the company responded on Facebook to the situation: “Thank you to those who have reported designs. We will review these individually and take appropriate action.”

But, the Huffington Post uncovered a few more offensive T-shirts that remain on the site, which you can see here. Even so, the message could still be considered offensive.