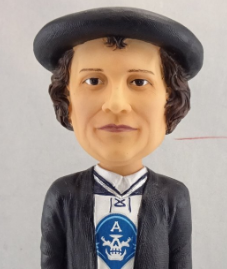 The Milwaukee Admirals will issue a Martin Luther bobblehead in late October. (Image via Twitter)

Ubiquitous and often humorous, bobbleheads have established a steady presence in the American consciousness, frequently inspiring some very novel creations. The sports world has perpetually given the nod to the figures as means to celebrate performers, but the Milwaukee Admirals are taking a leap of faith with respect to that custom. On October 21, the American Hockey League constituents will honor theologian Martin Luther with a bobblehead, 10 days ahead of the quincentennial of his initiating the Protestant Reformation.

This year has yielded a few significant commemorations, and come Halloween, loyal Lutherans will mark their namesake’s nailing of 95 theses to the Wittenberg Castle Church’s door. The then-professor, just shy of his 34th birthday, posted the gripes as a repudiation of the Roman Catholic Church’s practice of peddling indulgences for the forgiveness of sins. His actions obviously predated ice hockey’s genesis, so what are the Admirals doing in affiliating their game with his name and likeness? They are recognizing their surrounding culture and will likely find themselves blessed with much praise for doing so.

People often proclaim we should take vows of silence concerning politics and religion, but the franchise, which is the minor league affiliate of the National Hockey League’s Nashville Predators, is letting believers shout from the rafters rather than rooftops to acknowledge Luther. An account by the biglead.com christens the move “the greatest promotion of all time,” and while it is easy to absolve anyone who does not agree with that assertion, the idea rightfully recognizes that, according to the organization’s vice president/ticket sales John Bitter, around 100,000 Lutherans call Milwaukee home, accounting for roughly one-sixth of its population.

“We’ve got a pretty good tradition of unique bobbleheads,” a statement from the Admirals explained, adding that Bitter’s excitement over the 1517 event’s anniversary led them to approve a plan to get backers in the spirit of meshing the tenets of their faith with the tenants of the University of Wisconsin-Milwaukee Panther Arena.

The keepsake will feature Luther donning an Admirals jersey under his religious garb and will be one of three bobblehead giveaways they offer this season, with the others being Santa on November 24 and Frederick Gaudreau, a rookie sensation who scored three goals in eight playoff tilts last spring, on March 2. As Milwaukee houses the National Bobblehead Hall of Fame and Museum, odds are great that the October endowment will merit eternal devotion if overseers enshrine it. If they do not, one could presume that, akin to the founder of their faith tradition, those who wish for it to join other plastic commemoratives will have a few grievances to direct at the powers that be.