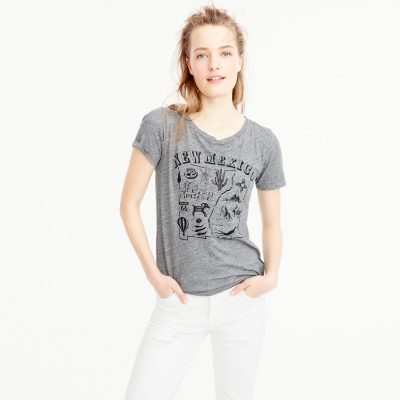 Baseball players can obtain Hall of Fame status by failing 70 percent of the time that they bat, and weather personalities often receive passes for inaccurate forecasts because, well, Mother Nature can be fickle. J. Crew has proven that retailers can rebound from mistakes, too, as the mega earner is profiting from a T-shirt that pays homage to New Mexico despite the garment’s geographical inaccuracies.

Residents and admirers of the Land of Enchantment can don their delight through the recently released $39.50 item. The New York-based company has lumped the union’s 47th entry in a line that includes nods to California and Florida, among others. And while one can laud the decision to celebrate a site that does not often end up as a headline grabber, design flaws have not escaped the eyes of inhabitants, making a Santa Fe, New Mexican blogger accuse J. Crew of “evident cluelessness about our state.”

With respect to the mistakes, dwellers, though thrilled that the merchandise peddler has represented the roadrunner, hot air balloons and pueblo-style buildings, have griped about the type of chile and cactus depicted and the placement of Santa Fe and the Shiprock rock formation. Certainly having aimed for a proper depiction of the southwestern state, J. Crew has fielded complaints about the gaffes, but overall pride has helped to generate solid sales, particularly in Albuquerque’s Uptown section, where the shirt sold out, prompting a second round of orders.

In its 105 years as a state, New Mexico has enjoyed considerable regard for its natural beauty and cultural diversity and has consistently attracted millions of visitors, particularly this decade. The J. Crew salute, though not entirely correct (The company has not announced plans to remedy the error), still serves as a quick introduction to the state’s wonders. For those who want the actual experience, make like a roadrunner, and travel there.