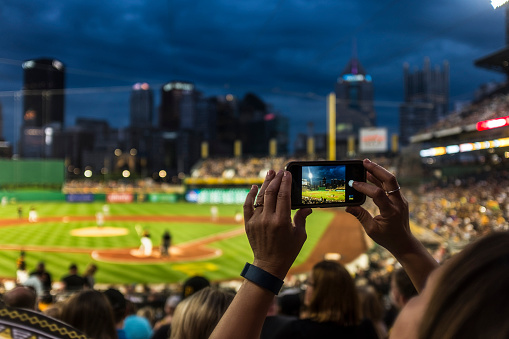 The Houston Astros have fashioned more than a few photo-worthy occasions lately, including their Game 7 road win to capture the 2017 World Series. However, the American League club’s Double-A affiliate, the Corpus Christi Hooks, decided against immortalizing the action at their Whataburger Field on June 20, as the team gave away promotional phone cases as part of a phone-free game that, apparently, was the first of its kind.

Current mood cause we won @MiLB's June Promo of the Month with our Phones Free Game for Coastal Bend Conservation Weekend ?

Special thanks to all our amazing staff and fans who came together to make it happen ?? pic.twitter.com/nuwen1LviT

Baseball traditionalists and any student of history could chastise this achievement as nothing, considering that baseball games at all levels featured no cellphones for decades (because, well, they had not been invented yet). In this day and age, though, it is hard to imagine any instance where someone would not at least have such devices handy.

The Hooks, therefore, pulled off something truly unique by calling on branded Yondr lockable phone cases to secure the devices. The organization, of course, could not ban attendees from bringing their phones to the game, but it wanted for their attention to go solely to the action on the field, with 2017 World Series MVP George Stringer a featured attraction, so to speak, thanks to a rehab assignment that saw him smack two home runs. Designated zones helped the phone-frenzied crowd members to use their phones at times, but the thousands who took to the Texas stadium that night went largely tech-free.

For the novel idea, the Hooks on Friday received distinction as Minor League Baseball’s June Promotion of the Month, making the affiliate eligible, through its Coastal Bend Conservation Weekend, for a Golden Bobblehead Award, which, for promo products geeks like ourselves, might be the best honor ever. While the mention of a possible bobblehead commendation could register as awesome enough for merch admirers, Yondr came out the bigger winner on a night when the Hooks crushed Springfield, 10-2.

Minor League Baseball has become a beacon for awesome promotions, and since the Hooks have been drawing decent crowds to their contests, Yondr did well to drum up interest in its cases by securing the phones in them. Thanks to the team’s promo-of-the-month victory, the company will likely generate some more publicity as the summer unfolds and the September 26 conferring of the Golden Bobblehead Awards approaches. Whether the Hooks’ promotion wins the ultimate prize, this matter still shows that ownership understands the value of a great promotional partner and that, to be a purist, baseball game attendees should glue their eyes to the diamond and not to the icons on their phones.