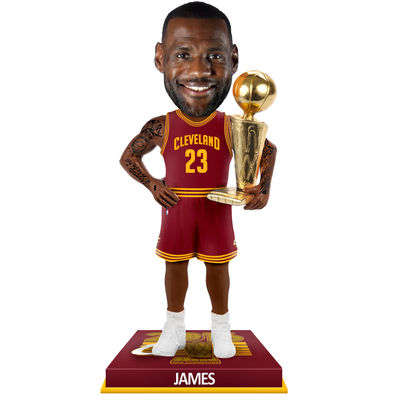 Despite going down three games to one, LeBron James and the Cleveland Cavaliers pulled off a miracle win in the NBA Finals over last year’s champions, the Golden State Warriors.

Cavaliers fans are celebrating (hopefully safely), and the team released its official commemorative merchandise to the NBA’s online store. Here are some of the items that stood out to us.

Of course, there’s the standard commemorative T-shirt, showing the year and the team. However, the team released a few more Cavaliers- and James-centric items. Now, since Sunday night’s game was game seven, it meant that whoever won would be the champion. So, naturally, there was plenty of Warriors gear ready for release (presumably after the team went up three games to one, even.) According to SportsLogos.net, some of the Warriors merchandise had the “back-to-back” theme. You also can see the planned merchandise that mirrors James’ “MVP” merchandise, but with Warriors star Steph Curry instead. Perfect to hang in a cubicle, this basketball set can be the arena to test your employees’ LeBron James skills. The next time you host a basketball tournament fundraiser, be sure to have this eye-catching trophy for the winning team. While a real basketball would make an awful tote, this basketball tote bag is the ideal sidekick to all sports-related events.