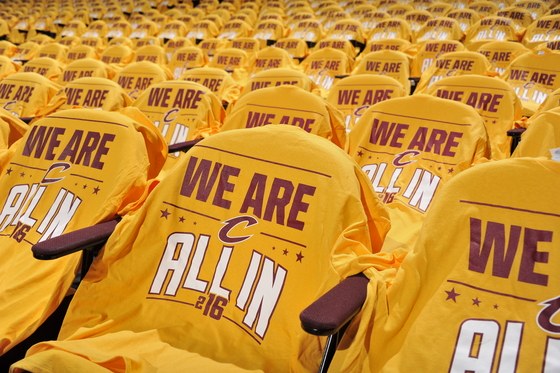 While Memorial Day weekend was full of beach picnics and poolside cookouts, plenty of people spent their holiday tuning into the NBA playoffs. With the Golden State Warriors down 3-1 against the Oklahoma City Thunder, Steph Curry’s team staged an epic comeback and became the Western Conference Champions. Meanwhile, the Cleveland Cavaliers beat the Toronto Raptors to become the Eastern Conference Champions.

With fans paying top dollar to attend these playoff games in person, the home teams often make great efforts to raise the bar for giveaways. Usually, every fan in attendance is treated to rally towels and T-shirts, and it’s these coveted branded products that are seen on TV by millions of viewers.

Check out the real stars of the NBA playoffs below.

Golden State must’ve ordered a bunch of these. Third-straight home game for this T-shirt. #Thunder pic.twitter.com/srXJnZvlNi

The Warriors also paid tribute to Craig Sager, the famous courtside reporter who currently is battling cancer, during one of the team’s playoff home games with these T-shirts:

The Warriors pay tribute to Craig Sager with this t-shirt for tonight’s game. #SagerStrong pic.twitter.com/g4mnCU6uiy — NBA on ESPN (@ESPNNBA) May 27, 2016

Although the Thunder didn’t win the Western Conference Finals, the branded T-shirts were a slam dunk. In conjunction with Gigablast, the T-shirts were ready on every fan’s chair and featured the phrase “This is Thunder Basketball”:

This is Thunder Basketball & this is our home. Shirts for all fans at Game 6 from Gigablast powered by @CoxOklahoma. pic.twitter.com/1bMeLtrVPj

Another home game featured these T-shirt giveaways in partnership with Storm Safe Shelters:

And finally, these T-shirts featured a throwback look similar to the “Space Jam” logo:

LeBron James’ team won the Eastern Conference Finals, but these “Wine and Gold” T-shirts had the fans’ cheering. The rally towels helped too…

The Cavs also gave fans these playoff T-shirts during one of the home games: The Toronto Raptors didn’t get the best response to its branded merchandise. Fans’ reactions were a mixed bag, and many didn’t understand the angle the team was going for.

Against the Indiana Pacers, the Raptors gave fans these T-shirts featuring snowballs and beavers (symbols the Raptors thought were symbolic of Canada): Image via The Star

With the negative response the team received, the Raptors tried something less divisive for their next promotion. These T-shirts went for a graffiti-esque look, but fans’ reactions were still more negative than positive. Image via The Star

As you can see, even an event as popular as the NBA playoffs needs a promotional angle. On TV, fans in the stands stood in solidarity to cheer on their home team, and the branded T-shirts made them look even better. Plus, those fans will continue to wear their T-shirts in the future. Consider outfitting your event attendees in branded T-shirts and they’ll be sure to thank you. Check out some of these T-shirt options for inspiration.