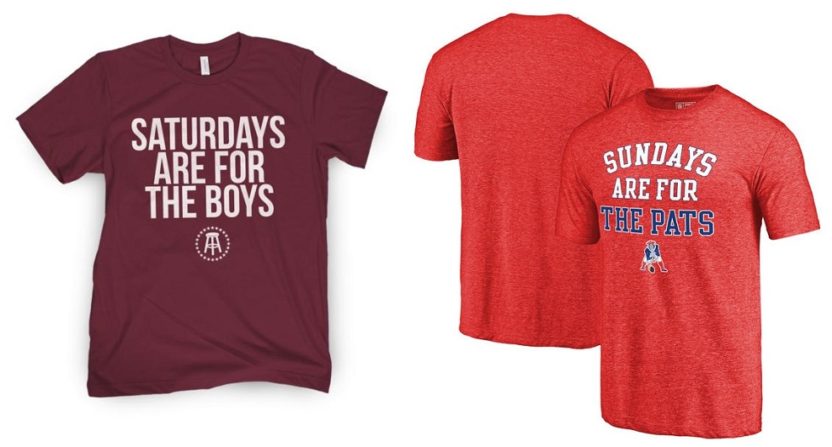 With its origins in Milton, Massachusetts and headquarters in New York City, Barstool Sports, through founder Dave Portnoy, has adopted a take-no-nonsense-from-anyone identity thanks to its satirical coverage of sports and men’s lifestyle matters and eclectic apparel collections. The items that comprise the entity’s Saturdays Are For The Boys (SAFTB) line have made Portnoy and his peers a few fans and, they are contending, one blatant imitator. According to the New York Daily News, Barstool intends to reacquaint itself with the National Football League by sending a cease-and-desist letter, the contents of which, it hopes, will inspire the overseer to stop hawking T-shirts whose text, it feels, violates the SAFTB trademark.

Anyone with passing knowledge of Barstool knows that nobody will ever consider the powers that be wallflowers. This year has found Portnoy et al plying their trade to the chagrin of NFL commissioner Roger Goodell and has seen them needing to receive the same type of legal document that it will send to the league today. Worlds have collided through the present matter, with the Barstool bunch asserting that the NFL’s “Sundays Are For The–“ merchandise that acknowledges the 32 teams of pigskin performers oversteps legal bounds. The aforementioned publication notes that Barstool trademarked the “Saturday” sentiment last year but adds that “It is not known if the NFL trademarked its own slogan.” Barstool, whose item appears on the left, holds that the NFL, on the right, has violated an apparel trademark. (Image via awfulannouncing.com)

While the Daily News relays the matter as a neutral observer by including thoughts from Portnoy and a mention of an attempt to contact the NFL, Awful Announcing borders on assigning blame to the supposed offender, stating that Goodell and his contemporaries should know “that antagonizing Barstool in a way that was completely unnecessary would just be chumming the waters for Barstool’s fanbase.” Given that Portnoy told the former source that the cease-and-desist petition is going out today, the matter is very young, but, regardless of its age, the situation has some very interesting aspects.

The clown shirts ordeal should make known to everyone that Portnoy will not be inviting Goodell over for Christmas dinner, so one wonders if the league is testing its might in issuing merchandise to draw Barstool’s ire. Conspiracy theories and speculation aside, from a trademark perspective, is the NFL committing an egregious misstep by swapping a day of the week and replacing “boys” with a franchise’s nickname? For an answer to that, expect both sides to buddle up and look for the best option to settle the dispute. Here’s guessing they will soon be perfecting their routes to a courtroom.