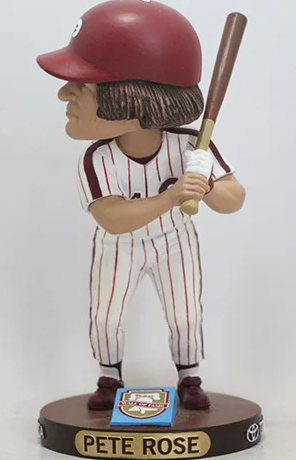 Rose was slated to be added to the team’s Wall of Fame on Aug. 11, and the team planned on giving out a Rose bobblehead on the 10th. The team and Rose told the press that it was a mutual decision to cancel his involvement with the alumni weekend festivities.

“While I am truly honored that Phillies fans voted for me to be this year’s Wall of Fame inductee, I am concerned that other matters will overshadow the goodwill associated with alumni weekend, and I agree with the decision not to participate,” Rose said in a statement to Sports Illustrated.

Sports Radio 94 WIP reporter Howard Eskin, a common source for Philly sports news, tweeted today that the bobbleheads would be destroyed, but, as the organization told us, that information is unverified.

As part of cancellation of Pete Rose #phillies Aug 12 Wall of Fame night , all 35,000 Rose giveaway bobbleheads Aug 11 will be destroyed

For fans looking forward to celebrating Rose’s career, which included bringing a World Series win to Philadelphia in 1980 and a crucial role in the “Big Red Machine” of the ’70s, the team will issue refunds for ticket holders.

Plus, Philly.com reported that the team hasn’t ruled out adding Rose’s name to the Wall of Fame in the future, so those bobbleheads may come in handy later on, if they aren’t destroyed after all.

For end-buyers looking to do a fun giveaway using a celebrity’s likeness, be prepared for a plan B, or you could end up with a PR nightmare like this one. Celebrities and athletes are far from perfect, so you never know when a promotion might have to be canceled at the last minute.