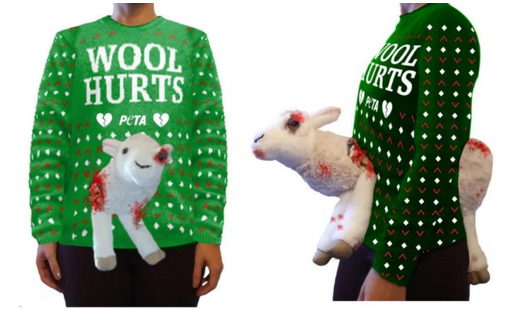 This Promotional Holiday Sweater From PETA Is Absolutely Insane

’Tis the season to show moxie. While the last two words of that sentiment don’t roll off the tongue as easily as “be jolly,” they aptly fit what PETA is looking to do to draw attention to its anti-wool campaign. Never one to shy away from employing “controversial tactics,” the animal rights organization is using the holiday season to rally for the welfare of sheep, with a “Wool Hurts” promotional holiday sweater that includes a bloodied plush sheep as an eye-catching addition.

Brands have become admirably adept at issuing goods that unmistakably represent their stances, whether they deal with something as casual as their culinary preferences or as intense as their takes on social issues.

Set to turn 40 next year, PETA holds through its motto that “animals are not ours to eat, wear, experiment on, use for entertainment or abuse in any other way.” The $149.99 sweater, then, will prove especially appealing to its supporters, who no doubt align with the organization’s contention that shearing causes sheep discomfort.

Made of acrylic yarn, the sweater certainly helps PETA stay on-brand with its anti-cruelty mindset in the design realm, and its inclusion of the sheep depiction remains true to its need to present the atrocities often involved in humans’ handling of animals. An unlikely entrant into the world of ugly holiday sweaters, it aspires to put “the ugliness of the wool industry front and center” and will ship the week of Nov. 25. Given that wool is the most commonly used animal fiber, one can be pretty confident that advocates will find the garment appealing, but will its steep price tag made them feel fleeced since the sweater is only a seasonal item?

As the New York Post relayed, the “Wool Hurts” creation joins a vegan popcorn tin set and an Eat No Turkey T-shirt (the latter of which, at least according to the website description, seems to be the handiwork of Paul McCartney) to form a trio of holiday-themed PETA goods. The tin and top, however, cannot touch the sweater as a sheer example of the lengths that brands go to so as to connect with their bases.

Since PETA has intensified the call to action against the mistreatment of sheep, the sweater could do wonders for its platform. If nothing else, it could certainly spice up the annual office ugly sweater competition.