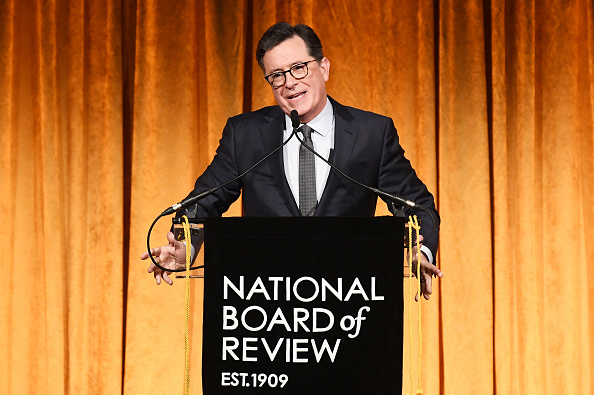 Given that he’s had an ice cream flavor, a spider and a treadmill named after him, not to mention his healthy collection of awards and honors, one can safely presume that Stephen Colbert won’t soon see his popularity dip. Americans often rely on humor to manage troubling times, and the U.S. federal government shutdown that commenced on Dec. 22 has proven a chance for Colbert to call on his comedic side. To benefit workers who are suffering the effects of the partial disturbance, he is hawking mugs that bear a funny take on a longstanding caffeine-centric bit of advice.

In this instance, Colbert, who created the ceramic product, is tackling far more than the first day of the workweek, as proceeds from mug will fund the efforts of Jose Andres’ World Central Kitchen, which, in its mission to change “the world through the eyes of a chef” is providing meals to furloughed workers affected by the shutdown.

Get you a Shutdown Mug! 100% of the Late Show’s profits go to @WCKitchen to help @chefjoseandres and his team feed federal workers during the shutdown! They’re available now at https://t.co/eFgj7pGOz7 pic.twitter.com/ZUjOJShdvn

From a branding perspective, the mug is the very definition of nondescript, but that has not stopped consumers from having it rival not only other Colbert items on the CBS store’s website but all products, period. Since the mugs have an expected ship date of Feb. 8, one wonders if their exact use as a commercial retaliation against the shutdown will still be applicable. If that intention still resonates, what might have earned consideration as a micro-moment contribution to the promotional products world could end up becoming a symbol of frustration. If the shutdown has ended by then, end-users will still have seen their money go toward the World Central Kitchen’s efforts, and that is certainly something worth raising a glass—or a mug filled with coffee, tea or bourbon, as Colbert joked—to as the country endures the longest government shutdown on record.

The mastermind behind the endeavor has garnered many supporters and detractors over the years, but, with this move, he is not aiming for brand recognition so much as he is hoping to alleviate worries for the furloughed folks who are likely struggling. In that regard, he is branding himself as a humanitarian,a move that could stand to become contagious as the year unfolds.