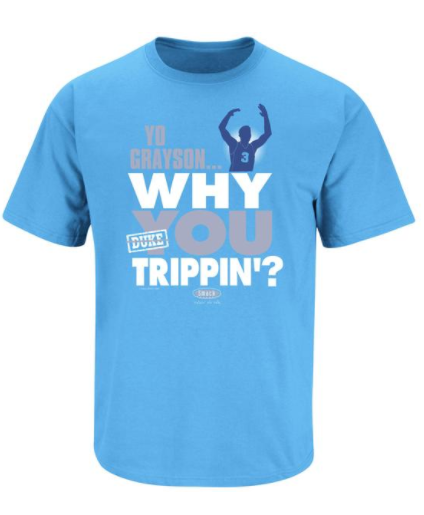 T-shirt Company Gets Cease and Desist From Duke, Responds In Worst Way Possible

The shirts feature a silhouette with the number 3 in the middle, and the phrase “Yo Grayson … Why You Trippin’?” This is a reference to Allen’s multiple tripping incidents this season.

Smack Apparel responded in just about the worst way possible, offering a rebuttal to Duke’s legal team via Twitter, claiming that its T-shirts fall within the First Amendment right to satire.

Yes, satire is covered by the First Amendment. And yes, Grayson Allen could be considered a public figure. The problem here isn’t that someone made a satirical T-shirt of Allen and Duke reacted. The problem is that he’s an NCAA student-athlete, and he hasn’t authorized anyone to use his name or likeness.

Wayne Curtiss, owner of Smack Apparel, apparently thriving off of the controversy surrounding his company, offered to fly to the Durham/Chapel Hill, N.C., area and conduct a poll, according to CBS Sports. If more than five people thought that the shirt was sponsored by Duke or Allen, he would stop production and provide 25 percent royalty on all sales to the university. If not, he wants the law firm to reimburse him $2,000 for his time and travel expenses.

This is reminiscent of when Dallas Cowboys quarterback (at the time for Mississippi State University) Dak Prescott sued a small T-shirt company for using his name and jersey number. In this case, since the NCAA strictly prohibited companies from using student-athletes’ likenesses, Prescott was forced to sue.

So far the cease and desist notice (and subsequent response from Curtiss) is as far as the Duke case has gone, but this one could be going to court. (And not the basketball court.)

For marketing and promotional items, it’s important to avoid using NCAA trademarks, player names and likenesses without permission, or you could end up in a battle like this one.