The Tampa Bay Lightning Had Players Design T-shirts, Hats for Charity (and They Look Pretty Good!)

Owing to a star-studded roster, the Tampa Bay Lightning have become a prime candidate to make a deep NHL playoff run. While the players deserve kudos for their skills, four of them also merit praise for their charitable involvement. Through the clothing brand ’47, the quartet helped design T-shirts and hats whose proceeds will benefit charities of their choosing.

player-designed hats? YEP. these four teamed up with @47 to bring their designs to life. available NOW at @shoptbsports in-store and online!! link in bio ?

The players and their apparel-centric collaborator debuted the limited-edition goods yesterday, and we’re eager to see how their release will inspire morale among not only the foursome but also their teammates. The Lightning have been one of the league’s most impressive teams since late December, and anything that could even remotely help them move beyond the sting of last year’s opening-round playoff loss will be a boon.

Enter the hats and T-shirts. While we appreciate the efforts from Anthony Cirelli, Ryan McDonagh and Brayden Point, we are going to give the top honor to defenseman Victor Hedman, whose bulldog T-shirt and cap combination is going to assist the Humane Society of Tampa. We also kind of love the script font in the “Tampa Bay” wordmark on the front of Cirelli’s shirt: 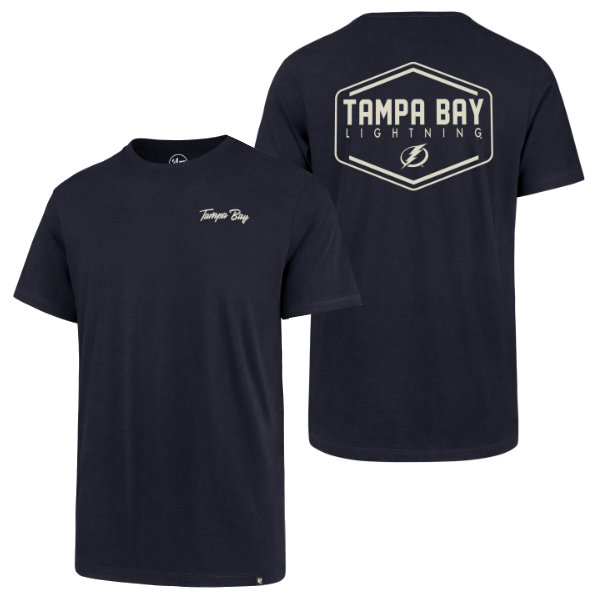 We have given occasional looks to the promotional products handiwork of athletes, so we find this partnership between the Lightning and ’47 a pretty neat way to show that sports are not always about the pursuit of dollars and distinction. In this case, Hedman and his teammates are showing that their contemporaries in the athletic world often wish to give back to their respective communities. Since all of their shirts have sold out (at least temporarily), we wonder when the hats will follow and how much the combined items will net for the charities that the players have chosen to support.