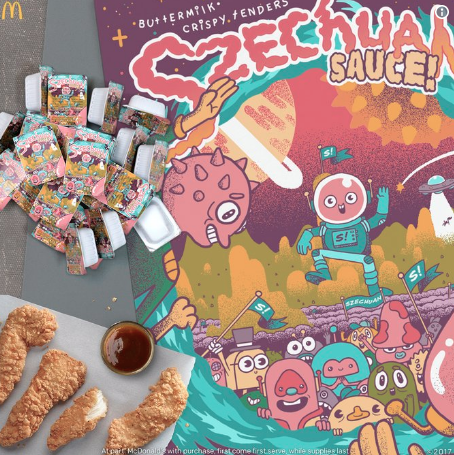 That Whole McDonald's Sauce Promotion Got Way Out of Hand

To celebrate the hit series “Rick and Morty,” McDonald’s released its Szechuan sauce for one day only. It turns out the single-day promotion wasn’t good enough for fans of the cartoon, as many restaurants ran out of the sauce almost immediately, finding themselves in the middle of situations that bordered on riots, with physical confrontations breaking out in some locations.

All of this because of a sauce introduced to promote a cartoon in 1998 that was brought up again in another cartoon in 2017.

“But McDonalds either underestimated the level of fanaticism among fans of the show or was unable to manufacture more of the sauce, which myrecipes.com points out can be made in roughly 10 minutes with dark brown sugar, brown rice vinegar, ketchup, soy sauce, and a couple spices. Fans were subjected to extremely long lines, Szechuan sauce shortages, and premature exhaustion of sauce supplies. On social media, there were reports of police having to come to break up fights at several locations—Motherboard has not been able to verify these reports.”

The best fans in the multiverse showed us what they got today. We hear you & we're sorry not everyone could get some super-limited Szechuan.

Got there an hour early for Szechuan sauce. Left because McDonald’s was only sent 30 packets. Sending bad vibes to McDonald’s Corporate smh can’t complete my serie arc now #szechuansauce pic.twitter.com/MTuAOSqwfG

It doesn’t take an economist to know that when demand is high for a product and supply is low, prices increase. Some of those who were lucky enough to get their hands on the Szechuan sauce went right to sites like eBay to sell them. Motherboard reported that single packets of the sauce (which are 1 oz.) sold for more than $250 on eBay. A three-pack went for $848.

One YouTube user posted a video of fans camped out for blocks in Los Angeles. Based on the makeshift shelters and abundance of folding chairs, some had been there for quite some time.

McDonald’s responded to a tweet and hinted that the Szechuan sauce could make a comeback later on.

For now, only a very limited amount of Szechuan Sauce exists in this dimension. But who knows where space-time will take us next? ?

Last night, McDonald’s came out saying that the sauce would make a return in Winter, and not just a one-off promo like this. This led some to question whether or not the shortage of sauce was the plan all along, or whether fans really out-demanded the supply of sauce.

Ed Zitron, CEO and founder of public relations firm EZPR, told Motherboard that he believes this shortage and subsequent mob scene was all part of McDonald’s plan.

“I think that they planned this exactly,” he said “It kinda reminds me of the Taylor Swift Apple Music situation.”

(For those out of the loop, Swift originally took all of her music off of streaming services, like Spotify, only to bring it back the same day as Katy Perry released a new album.)

“Do you think McDonald’s just made like, 1000 of them [sauce packets] and then went, ‘Welp that’s it. Delete the packaging folks!'” Zitron said. “Of course not. They knew it’d get some people mad. They probably didn’t predict riots but definitely knew people would be enraged. That image response was likely pre-drafted and ready to post.”

“Rick and Morty” co-creator Justin Roiland chimed in to voice his disappointment in the way McDonald’s handled something that was supposed to be fun for fans.

FYI: We had nothing to do with this McDonald's stuff. Not happy w/how this was handled. Please be cool to the employees it's not their fault

If anyone ever says that promotional products don’t make a difference, tell them the story of the Szechaun Sauce Wars of 2017.