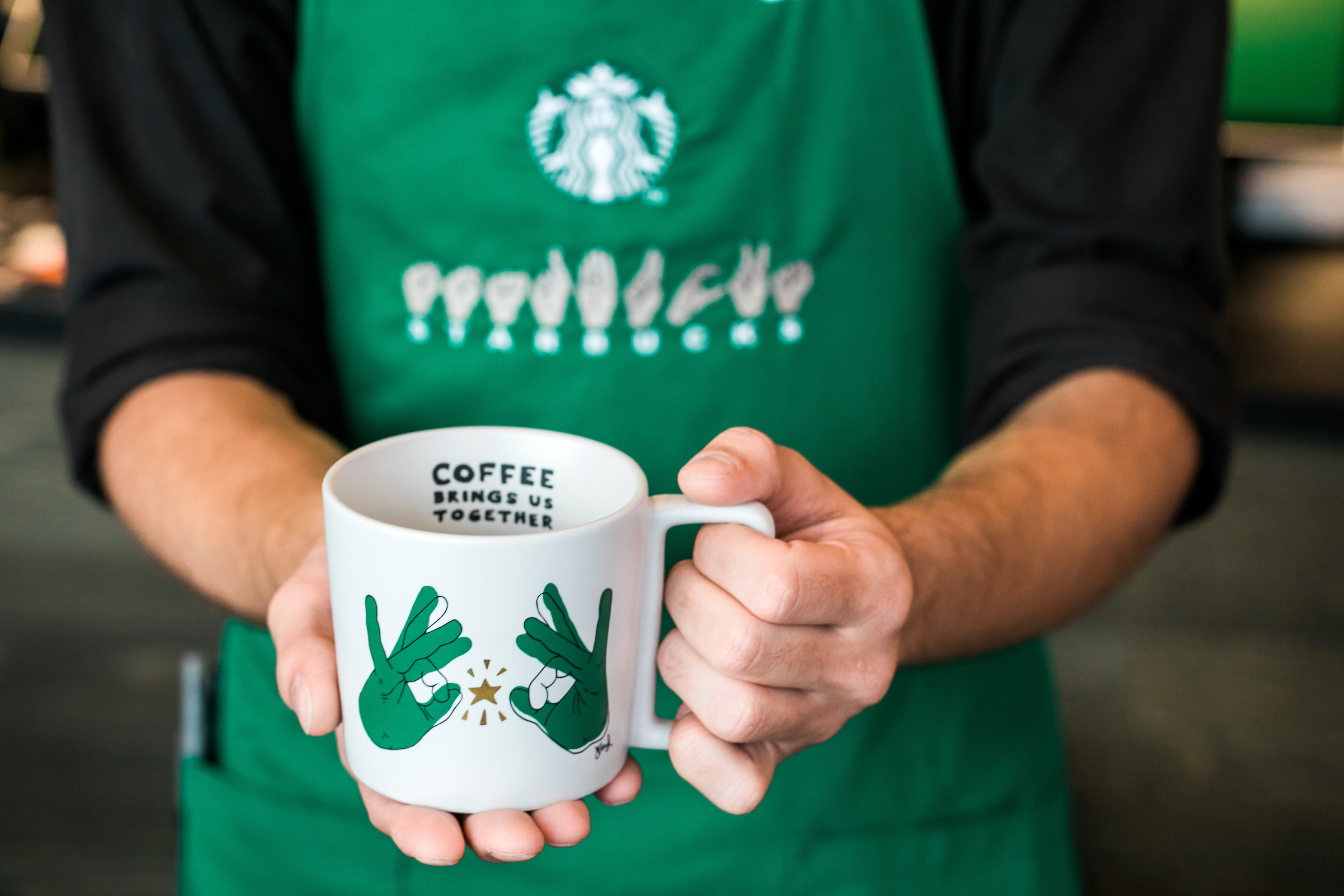 Love it or loathe it, Starbucks, with more than 28,000 global locations as of June, will not be going anywhere for a long time, literally speaking, that is. Figuratively, the coffeehouse chain is headed in a very commendable direction due to the Tuesday opening of a Signing Store, with two-dozen staffers helming the destination via the use of American Sign Language. The company’s overseers are lauding the Washington, D.C. java joint as the first such business to make exclusive hires of individuals with that mastery, and they are marking the unique concept with fitting branding and merchandise rollouts.

Only a few months removed from a reported racial bias matter that necessitated training for thousands of workers, Starbucks is making another move toward complete inclusivity with the Signing Store. Its proximity to Gallaudet University—itself quite singular in being the world’s lone university for deaf and hard-of-hearing people—deserves a nod, as that decision reflects an appreciation for the student body’s adaptation to the hearing world.

The opening proves that businesses must often take into account not only end-users’ product preferences but also their physical capabilities, and the latter realization will likely yield plaudits for the aforementioned branding and merchandise representation. Scroll through the gallery below to see how Starbucks went all-in on the inclusive items. (All photos by Joshua Trujillo, Starbucks.)

Regarding the branding, a deaf supplier embroidered the staff members’ aprons with American Sign Language breakdowns of the Seattle-headquartered company, so here’s hoping that the powers that be consider marketing those garments. Aside from being a commendable acknowledgment of the more-than 200 deaf/hard-of-hearing Starbucks hires worldwide, these items could be a nice touch not only as a brand builder but also as a call to become more curious about how such individuals and their contemporaries communicate.

With respect to merchandise, what would being a Starbucks patron be like if that meant not having a shot at drinkware? If the company has its druthers, there will never be an answer to that question, as it is adding to its legacy by having the Signing Store contain coffee mugs with “Starbucks” in American Sign Language and the message “Coffee Brings Us Together.”

The store is on only its fourth day of operation, so it will be interesting to track how well it does not only financially but also altruistically, as it’s apparent that Starbucks has its eyes on far more than building immediate revenue with this salute to the deaf and hard-of-hearing population. Because of the novelty, we are incredibly curious to see what other merchandise and American Sign Language-centric branding Starbucks might issue or employ. What is obvious is that it has heard loudly and clearly that the Signing Store is a chance to excel at far more than hawking coffee.