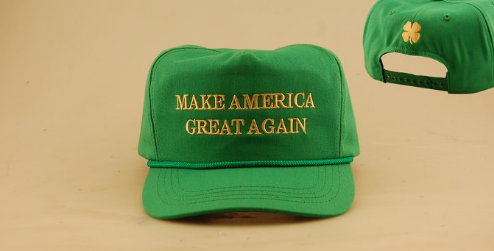 To get into the spirit of St. Patrick’s Day, the Trump-Pence campaign webstore was selling green, St. Patrick’s Day-themed “Make America Great Again” hats with a shamrock on the back. The only problem: They printed a four-leaf clover instead of a shamrock.

The internet was not forgiving:

You might be thinking, “It’s just one leaf, what’s the difference?” Well, the three leaves of a shamrock represents the Holy Trinity in Catholicism. St. Patrick is typically depicted holding the shamrock, and it’s used as a symbol for the Emerald Isle.

It looks like the Trump camp has discontinued the hats. The product disappeared from the campaign website, its page replaced by a 404 error.

As Time pointed out, this wasn’t the first variation on the hat that the Trump campaign has issued. After the election, they had a style with a large “U.S.A” printed on the front and “45” on the side. So, it’s not out of the realm of possibility that we’ll see more themed “MAGA” hats in the future.