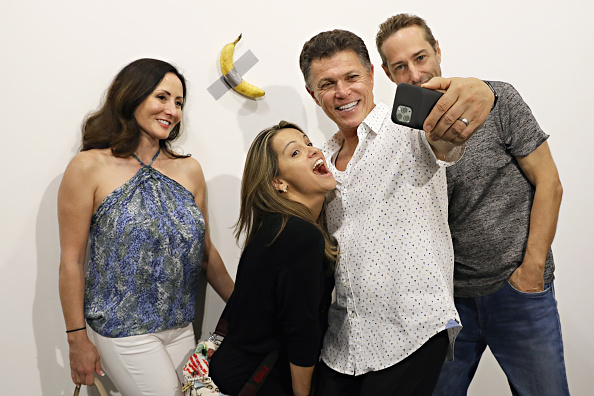 That Viral, $120,000 Duct-Taped Banana Artwork Gets an Official T-shirt (for Charity)

The notion of “art for art’s sake” drives many creative endeavors, but that motto can end up painted over when someone’s output can serve a more defined purpose. Such is the case for “Comedian,” the banana artwork by Maurizio Cattelan that likely sparked a few I-could-have-made-that reactions from onlookers. Nearly two months after the Italian unveiled the thought-provoking piece that fetched a pretty decent $120,000 payout, a T-shirt featuring the fruit and duct tape as a fastener is available through the entity that represents the artist, with proceeds benefiting an anti-hunger organization.

Aside from his functional golden toilet creation dubbed “America,” we had not known much about Cattelan before he gave “Comedian” to the world. Given the minimalistic aspects of the latter, especially when compared to the grandeur nature of “America,” it drew ample attention, to the point of receiving distinction from artnet as “the most talked-about artwork of 2019,” becoming partial inspiration for unionized janitorial workers, too.

While the $120,000 price tag that came with “Comedian” is not something that most of us could meet without blinking an eye, the $25 cost of the T-shirt will not cause much financial concern. Through sales, Perrotin Gallery is assisting Feeding South Florida, with four counties benefiting from the interesting way to detail the popularity of Cattelan’s stroke of publicity genius.

Like the marriage of the banana and strip of tape that inspired it, the garment is pretty nondescript, but the depth of its altruistic identity more than makes up for the no-frills design that end-users will show off. The shirt debuted on Saturday, with New York City consumers making the day a profitable one for the Perrotin crew’s anti-hunger campaign, and the gallery’s website notes that online purchases will be “shipping from the first week of February.”

From an artistic point of view, “Comedian,” as mentioned earlier, has become a much-discussed creation, and its food theme, therefore, lends itself nicely to being the subject of a product that can assist the lives of numerous individuals. The banana artwork T-shirt will likely be a hit, too, and has us wondering if Cattelan and other artists might use 2020 as a chance to align themselves with companies that can produce goods whose proceeds will have a partial or full charitable aspect. Art has long found itself the subject of apparel options anyway, so perhaps the greater good will soon receive similar boosts from creators through T-shirts akin to the “Comedian” one or other sorts of attire items.